Located in the Brahmagiri hill near Bhagamandala, which is one of the 7 sacred rivers of Sapta Sindhus of the Hindu scriptures. Itï¿½s around 1,276 m above sea level. Talakaveri is about 8 km away from Bhagamandala and 48 km from Madikeri. However, there is not a permanent visible flow from this place to the main river course except during the rainy season.

The temple here is dedicated to Lord Agastheeswara, which denotes the link between Kavery and Sage Agasthya. It is also marked by a small temple, and the area is frequented by pilgrims. There are 2 temples, a Shiva temple and with a rare and ancient Shiva Linga, and another temple dedicated to Lord Ganesha. This temple has a holy Ashwantha tree where, according to legend, the Trimurtis – Brahma, Vishnu and Mahesh gave darshan to sage Agasthya. Kaveri River originates as a spring feeding the tank called the holy Kundike , which is considered to be a holy place to bathe on special days. The waters are then said to flow underground to emerge as the river some distance away. The temple has been renovated extensively by the state government recently. [Click on the HQ gallery to view Talakaveri images exclusive for Paradisecoorg visitors.]

On Tulasankramana day (the first day of Makara Masa [ Hindu calendar] , which normally falls in mid October thousands of pilgrims flock to the river’s birthplace to witness the rise of the fountainhead, when water gushes up from the spring at a predetermined moment. The Tula snanam (Sacred bath in the Tula month) is observed across pilgrim towns in Kaveri’s banks. Legends also has it that every year on Tulasankramana day Goddess Parvathi appears in the Kundike as the sacred Theerthodbhava. Also from Talakaveri, steps lead up to the nearby Brahmagri peak, The Sapta Maharishis are said to have performed a special yagna.. Tourists can enjoy a good view of the misty blue Brahmagiri hills .

The legend goes that, the Kaveri river was held in a Kamandalu (a container of sacred water) by Sage Agasthya. Vinaayaka (Lord Ganesha) took the form of a crow and perched on the kamandalu of Agasthya when Agasthya was meditating. When Agasthya realised this, he shooed away the crow. But the Divine Crow tipped the kamandalu and toppled it. Out poured Kaveri which started flowing. The crow disappeared and in its place stood a small boy. Agasthya thought that the boy was playing some prank and clenching both his fists, went to pound the head of the small boy. But the boy escaped and Agasthya gave chase. Finally the boy vanished and Lord Ganesha showed Himself to Agasthya. Agasthya was aghast at the realisation that he had just tried to knock the head of Ganesha Himself. As atonement, he knocked his own head with both of his clenched fists.The link between Kaveri and Ganesha also extends to Srirangam as well, in Lord Ganesha’s role in setting up the Ranganatha temple there.The temple at Tirumukkudal Narasipura (confluence of Kabini (aka Kapila river, Kaveri and invisible Spatika Sarovara (Crystal Lake)) is also dedicated to Lord Agastheeswara.

in the last week
Very peaceful temple with gentle breeze and historic/traditional significance. Especially good visit on weekdays as there wont be much crowd as well. Serene.

a month ago
The temple itself is beautiful and the location is surreal. The views are absolutely breathtaking. Such divinity. As tourists we must keep in minsd to follow dress code! Ensure that you are wearing full pants or skirts and have not worn anything sleeveless. Since it is a temple premises; the dress code is strictly followed.

2 months ago
This place must be put in the top 5 places to visit in your bucket list when you travel to Madikeri. It is said to be the originating point of the Kaveri River and drive to the hill top is very beautiful. There exist a trekking path as well which is adventurous.

in the last week
A very beautiful temple. Surrounded by scenic views. The place where river Kaveri originates. Since the livelihood of the people living here depends on this river, it has a lot of auspiciousness. One experiences peace in and around this temple. A must visit.

a week ago
Beautiful temple located atop the hill, nice views, you might capture some amazing shots. Just wear appropriate dress as per the policy. On the way many spice and wine(local made) shops are there 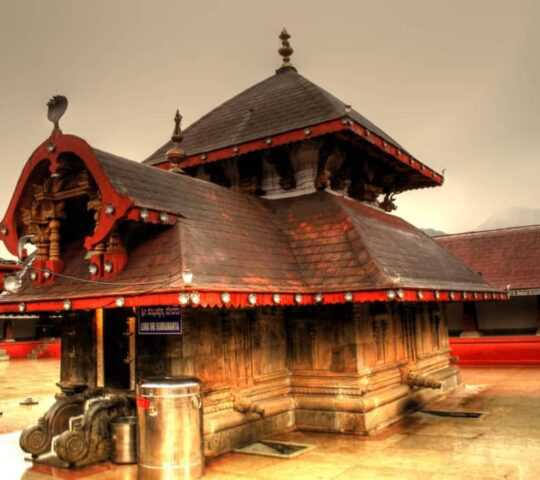